Well another bunch of time has passed since I posted anything here. But I have a new project that I am hoping to share information that I find. My wife got me a 3D printer for Christmas. Specifically the Xvico X3S. Sadly, a part broke within the first couple days of using it. It's not a big issue, but unfortunately is right at the filament feeder, so I can't do anything with it until the replacement part comes in.

What I have learned so far

I have been interested in 3D printing for years, but I never particularly knew the details in what it takes to print. The first thing I tried was to just take one of the STL files and print it. I very quickly found out that you can't directly print the STL because you have to "slice" it into gcode that tells the printer how to actually print the model. OK. That makes sense.

So my next attempt was to print some of the sample gcode files that were on the SD card that came with the printer. It mostly resulted in some PLA spaghetti because the first layers would not stick to the bed. It also turns out that I was probably running the extruder too hot for th PLA that I have, but I never actually verified that. I later stumbled into that when I manually sliced something and it set the temp in the gcode.

Levelling is a major issue. It took a few attempts to get the level correct, and even after I was pretty sure I had it, the print still wasn't sticking. That's when I discovered that they shipped a gluestick with the printer for a reason. I smeared the gluestick on and restarted the print. The first layer was rough, but it did eventually start to print things and I ended up with this cube (ok, technically a rectangular prism). 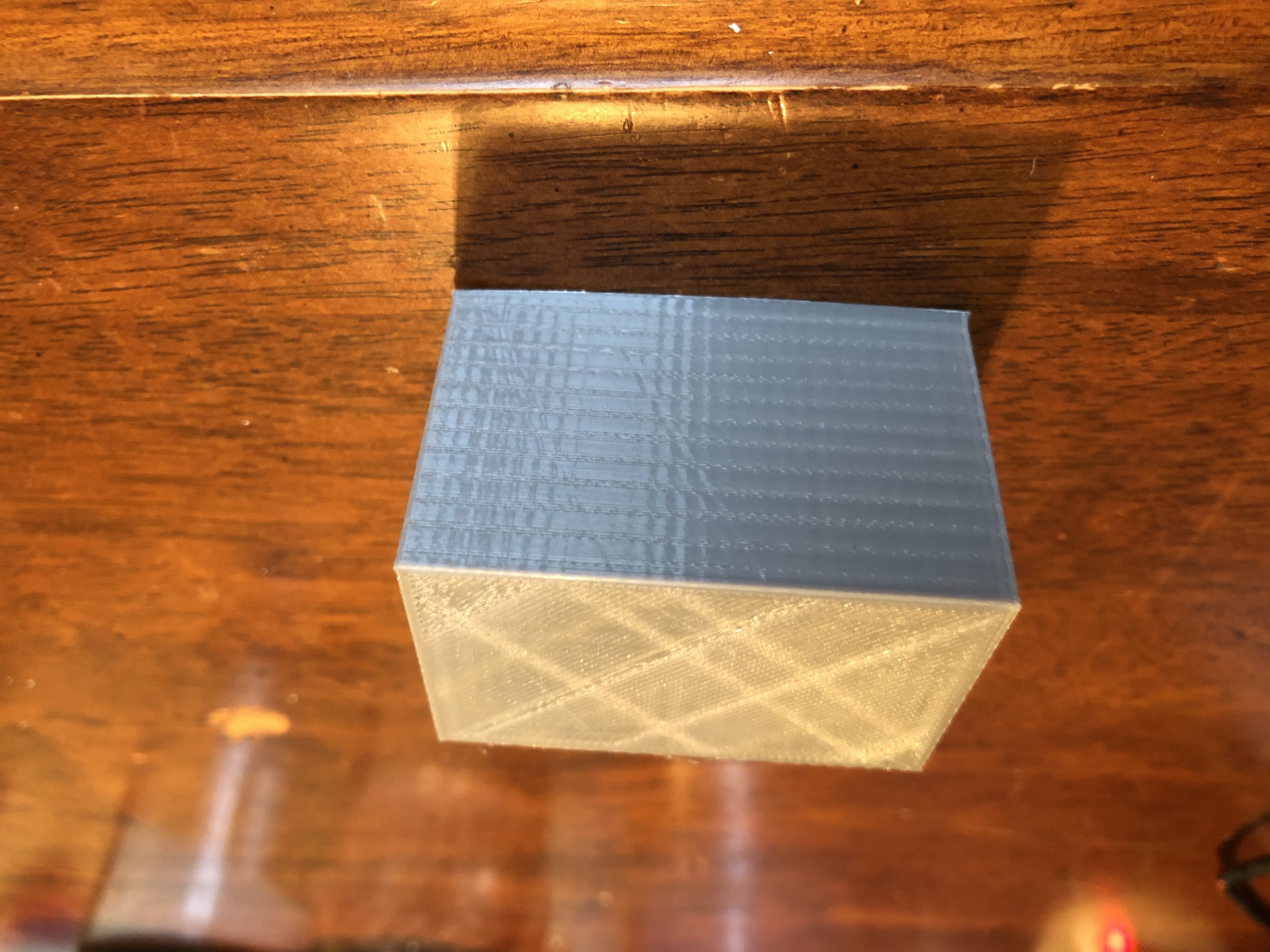 A little messy, and in the bottom right you can see there were a couple layers that were missed. Ultimately I marked this a success.

We have had an issue with our bathroom sink for months. The plastic nuts that hold the faucet in place broke, and we never got a replacement. This seemed like a good place to make use of the 3d printer. I went to Thingiverse and found a model of the thing I was looking for.

The printer documentation referenced Cura as the slicing software, so that's where I started. I downloaded the STL, sliced it, sent it to the printer...and OMG, a fairly perfect print came out. 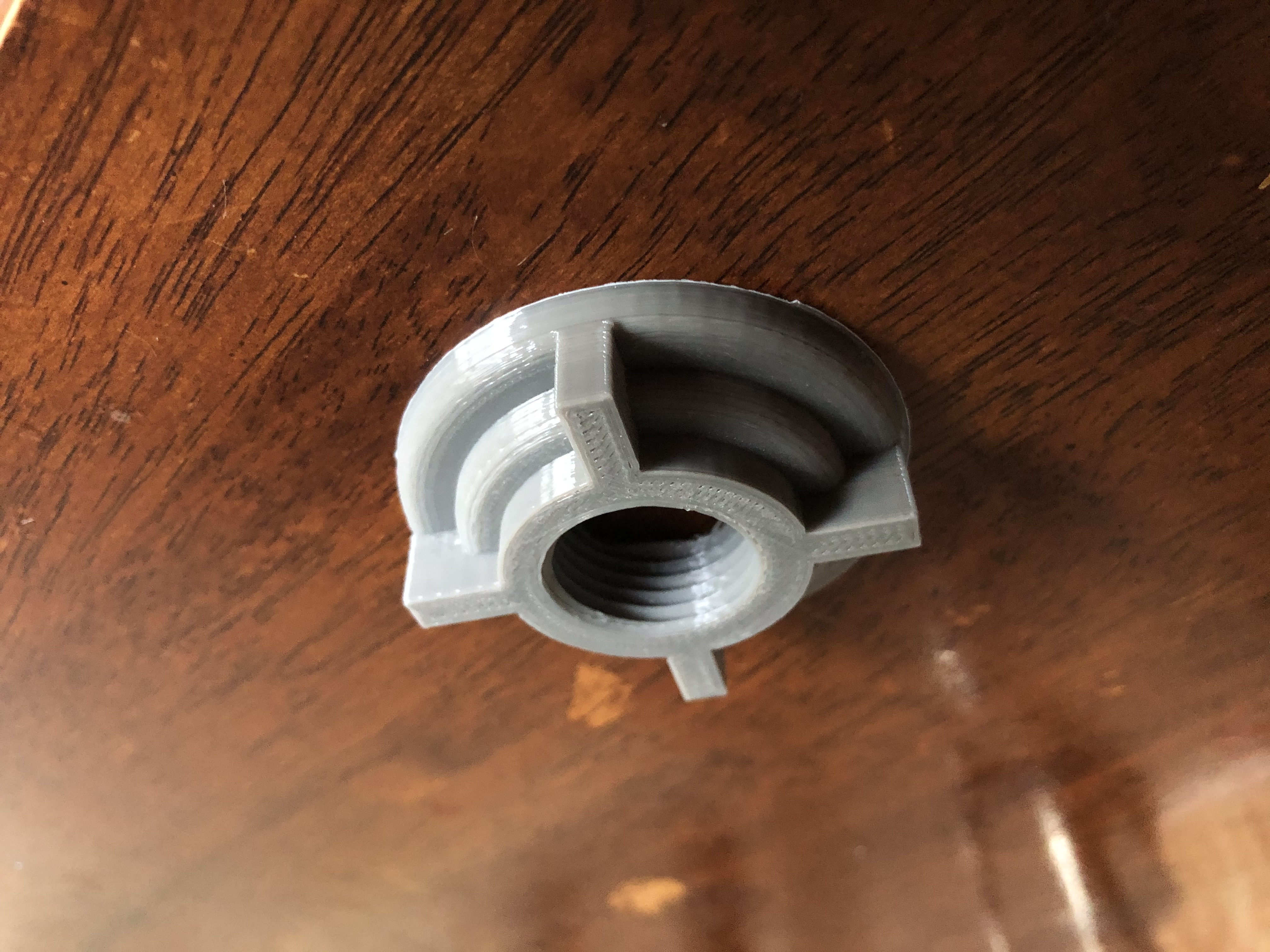 I printed a second one and proceeded to install them on the sink.

As it turned out, the "shorter" one that I used didn't end up working. So I printed the "standard one" that the shorter one was a remix of. I didn't know how the navigation on thingiverse worked and couldn't find any other ones using the search, so in order to not lose all the effort for the first print I decided to figure out how to model something in FreeCAD and made a 10MM "washer" to extend the piece so it would work on the sink. I ended up installing the one with my extension, and the standard one.and VOILA! The sink is fixed! 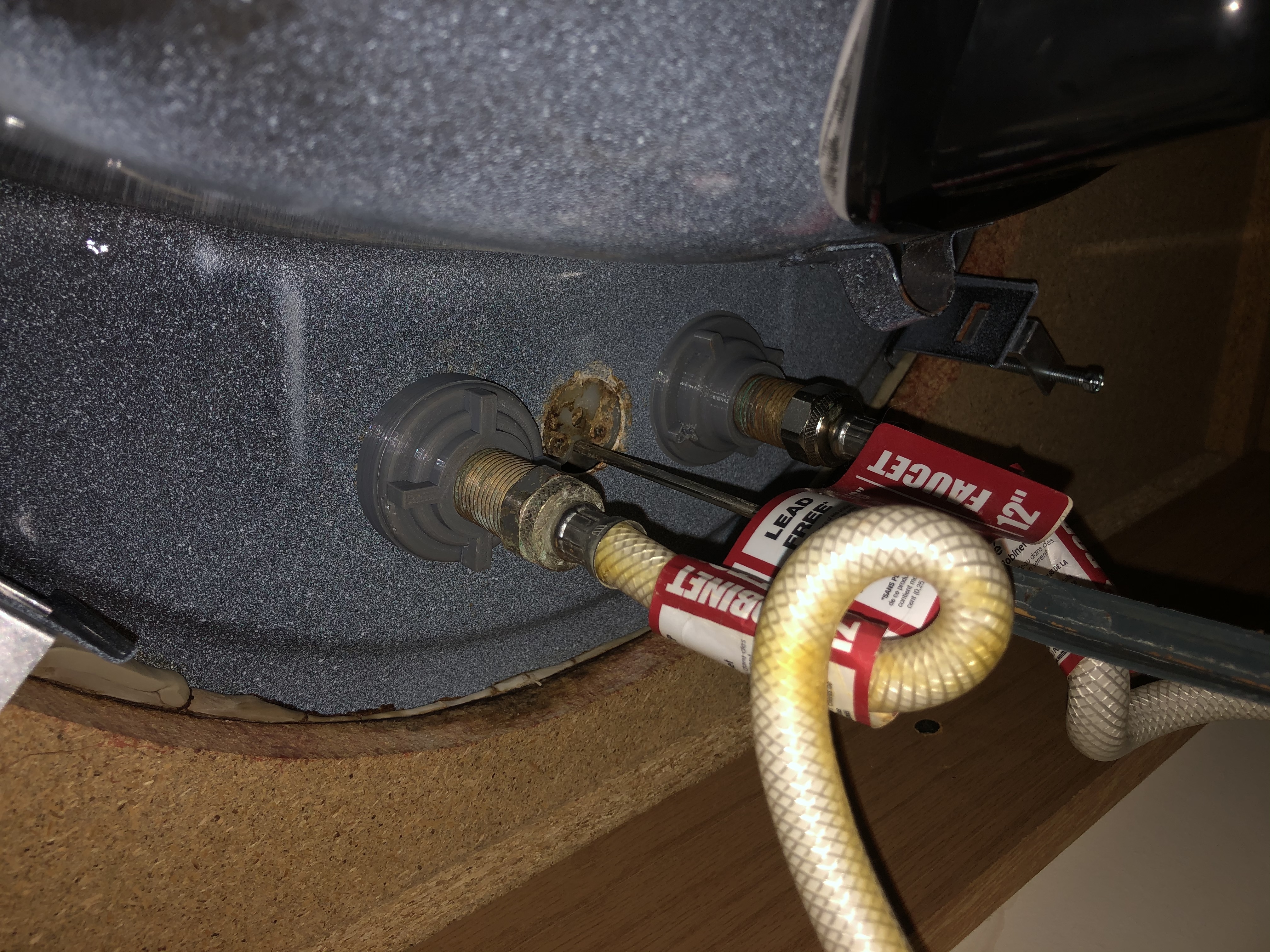 Cura is fine, but I was running up and down my basement stairs copying .gcode files to an SD card and sticking it in the printer navigating on the screen to do the print, and while it worked, it all seemed a little cumbersome. So I decided to see what happens when you plug in the USB interface. I found Printrun which is more up my alley with a console/CLI access. At least this way I could type in move commands, and preheats without all the screen pushing on the printer itself. And I could load the gcode from a shared location and not have to physically carry it on an SD card any more.

Printrun/Pronterface lead me to Slic3r, which ultimately lead me to Octoprint. Unfortunately, I haven't been able to print anything since I figured out this workflow, but it looks like exactly the setup I imagined, even before I knew how any of this worked.

So in the 3 days that I had between receiving the printer, and ultimately breaking it...I figured out a lot of stuff. This is only the beginning and I hope to share much more information as I discover it.